It has been 1 year and 4 days since I posted my first COVI-19 Diary entry, and despite a month of marking and commitments it is time to get back in the saddle and write. I started working on COVID on February 12th 2020, emerging from a state of general interest flowing from working in Global Health to specific need to engage. Like so many things as an academic, an invite to lecture at the University of York on the international politics of the virus, then confined almost exclusively to Wuhan, embarrassed me into starting to look at what was transpiring. Later than some and earlier than many I suppose, but only in early March realising how out of control it already was.

The Diary project has gone forward is a kind of very loose fashion (which was intended), with many hundreds of entries from across the world. It never really took off in the Global South despite numerous calls and engagements with contacts. Problems of time, capacity and bandwidth were all cited and all unfortunately understandable. But the corpus of contributions have combined the personal, the anger, confusion and loneliness, all with the reflective, the professional and analytical. The sense of new reality and scale of the crisis emerges over the year, with so many angles and entry points to date.

My own diary has slowly drifted from the personal and observational, looking more inwards and immediately around, to the analytical, mostly converging on the many intersections between COVID and neoliberalism. Publications have followed posts and there seems to be a great deal to say about Stephen King’s advice on writing, write a lot and often. Even so, I think the political economy of the pandemic is still being largely ignored and should keep on going in that area. A book is underway.

With a one year on theme in mind I started to try and synthesise some of the themes and thinking in my own diary and struggled to have any resonance with the experience way back in last year and the now. I certainly cannot any longer credibly think that my own inward self-reflections on the pandemic experience have any interest for others, nor for me that matter. They are what they are, and I will just leave the earlier entries up in good faith. Likewise, it seemed inappropriate to have some sort of review of the analytical content from the year. Far too boring perhaps.

So I settled on the visual and the visual emotional politics of 2020, looking back through many of the photographic images from the last year that I have written about or stored away physically or mentally. I have never engaged with visual politics, so this will be a desperately naïve attempt to distil meaning from these images of a pandemic year. But the resonated with me nonetheless, and of the many millions of images of the pandemic, the news stories and so on these are the ones that still power anger and sadness. I had not thought about them as a collection, even though I started the process of going back though and collating these images in December. What is striking now is that they speak to themes of abandonment, sacrifice and precarity, in the main. What have we been prepared to abandon, the who and the where, and what have we been prepared to sacrifice whether deliberately or carelessly, or structurally. There is a so often idle structural violence to all of the images selected, and structural violence as Paul Farmer so eloquently framed it is always a driver in stories of sacrifice and abandonment in health and other spaces of poverty and neglect.

Many of the images are tempered by what can ethically be photographed and publicly displayed. Dead bodies are guarded or covered, that perhaps is natural and to be welcomed. I don’t know. I am just going to put the links to each photograph, display some background and facts, and rehearse context and reaction. Pictures are powerful and visceral and writing is sometimes only a poor second to what they capture.

The first image is part of the events my diary focused on in March and April of 2020, taking me back via the unfolding scenes to my own grandfather who died in aged care almost 40 years ago, after his own enforced long-term care in a home. There are many images to choose from, include, including the first Spanish soldiers entering long-term aged care homes in March to disinfect and carry out the many dead. There was an aged care catastrophe in the first wave of the pandemic in Spain, one which would be replicated in the OECD with many of the deaths from the pandemic- estimates of 50% of all deaths – being amongst long-term aged care residents. But in Spain, as the first reports started to reverberate in the last week of March, this was new and deeply shocking.

Residents in many homes with infections were abandoned as dead or dying or simply written off. Staff were too sick themselves, or too scared or poorly paid to provide care. By March 23rd the military in Spain were ordered in to disinfect and collect the bodies. We know that by June 2020 some 20,000 elderly residential care patients had died in Spain. In Madrid alone, and by mid-April after a period of just 3 weeks of intense infection, there were 5,000 such deaths. We know now we have collectively looked away and abandoned the elderly, socially hived off the problem to private providers and poorly paid care workers. Long term disabled and mentally ill care residents have faired as badly, if not worse.

Here is a photo of the glowingly named Palacio del Hielo in Madrid, an ice rink near a shopping centre in the city. It is one of many from March 24 carried by multiple news outlets, but one of the few images from inside during its hasty refit as a giant mortuary. Each of the cots is in a semi-darkened arena floor. The ice rink is divided by a precise geometry, each one with a coffin, a sign or paperwork on top detailing we assume the name and time and place of death. The silence of the picture and the scale is overwhelming, almost military in its organisation, and captures only part of the totality. It is starkly cold and absolute to me. We know that staff in the homes were wearing refuse bags and home-made masks, we know that many of the residents killed in Madrid ended up at the ice palace in these weeks. The image The rink exited service in mid-May 2020, with a solemn ceremony but with a great deal of press attention to Spain’s tragedy but endurance of the pandemic. Since then, two more waves have struck Spain and the number of aged care deaths has risen to 30,000, although records and data are thought  to provide an underestimate of true numbers. 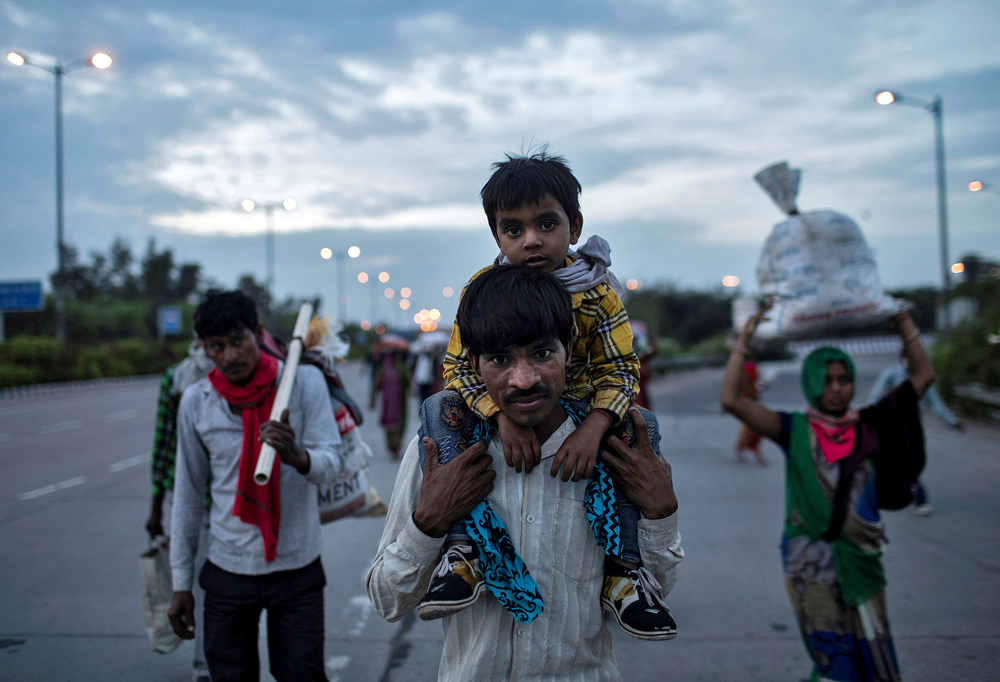 The second image of of a young boy being carried along a road by his father with a group of other roadside travellers. Again, the image is dated from late March and is one of a number of images of the Indian migrant workers that exited the major cities of that country in the aftermath of the hastily announced Union government lockdown and state governments lockdowns of March 20, following the urban spikes experienced in the cities of Mumbai and then Delhi. Many thousands of migrant workers were forced to leave caps and industry dormitories, or roadside encampments and slums on the margins of the metropolis. Work had ceased and with it income and food. As many as 140 million such migrant workers are thought to work in India, either seasonally or effectively permanently. They were left without income and food and with little or no rights or welfare support had no choice to leave, many by foot, for home villages in Bihar, Madhya Pradesh, Odisha, Rajasthan, and so on, or from the tribal areas surrounding Maharashtra state. Public transport had been halted, and the government was eventually embarrassed into providing trains and buses. By September, Parliamentary statements confirmed that it was thought that 10 million and had attempted to return home, many did not board state transport due to starvation; many died on the return by foot by means of road traffic accidents or exhaustion. Images of villagers and police beating migrants returning home also surfaced. Relief trains were pelted by stones. They were in breach of a lockdown and widely viewed as carriers of the then urban located Indian epidemic. On return many migrants were confined to poor quarantine facilities with inadequate food and sanitation

The eyes of the child, I would guess at 3 or four, are blank and the father looks haunted, exhausted and near defeat. Some journeys undertaken were in the hundreds or even 1000s of kilometres. It is desperate and haunting and there is no record of their names or fate. They have effectively been abandoned by the state or factory or employer, either way there is nothing clearly for them but what they carry. Indeed, there is no official record or approaching accurate estimate of those that died returning according to government sources. The image is small and personal but telegraphs the biblical scale of this desperate human tragedy. A forced movement of people on the sub-continent unequalled since Partition. After lockdown ended on June 1st, the reverse occurred. With little in the way of income and relief in rural areas the same journeys were once again undertaken.

This is image is also from the same movement of people, taken on March 27, from India as well. It is included because it speaks to the same crisis with the same driver, but we know her name and some of her circumstances. I suppose more empathy therefore flows in that with that limited knowledge and her particular age. Her name if Kajodi and she is thought to be 90 years of age. She is carrying all she could muster and walking 400 kilometres from Noida (Sector 15), Delhi to her family home in Rajasthan, with apparent hopes of finding bus transport at some point out of Delhi. She is clearly frail and exhausted, leaning into her stick and looking only ahead. Traffic police break up groups of women resting together at the roadside.  Her family are also travelling along the same route, but they have small children have had to leave her behind to make time. Her livelihood in the city was selling trinkets, plastic toys and keyrings at traffic lights, this all ending with the March lockdown. She is one of the millions stranded and dispossessed, one of the unlucky informal workers that comprise some 90% of the Indian workforce. I know nothing more and can find nothing of what happened to her.